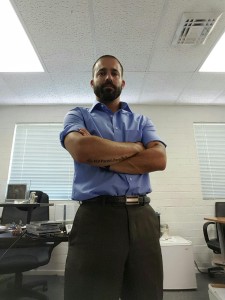 Tony Mizrahi joined the United Sates Marines in 2006 and spent 8 years in infantry, achieving the rank of Corporal, and 4 years Active Duty Reserves.

Tony was born in Israel and lived there until he was 7-years-old when his parents decided to make a big change and moved to Tarzana, California.

“When I got out of the Marine Corp, I applied for law enforcement but was told there was a two-year ‘cooling off’ period for military Veterans before they could apply. That’s when I decided to go into business for myself,” says Tony.

Tony established MBSC Group, Inc., a security company where he would only hire Veterans. “Doing security would make it a really easy transition from military to civilian life. For veterans by veterans.” He wanted to help others coming out of the service find gainful employment in a field they would feel comfortable with. “I will be paying the Vets a living wage, and it’s a skill set they already have.”

He took a year to complete his OSCA certification as a safety and health official in the construction industry, and because he felt it would take him further, he then completed the instructor trainer course so he could be a site safety supervisor. “It helped me understand what I needed to know to run my business.”

“I went to U.S. Vets when I first got out and wanted to work there. When I told them I wanted to be an employer at some point, they recommended that I reach out to The Jonas Project. They helped me write up the email to request some information. Then I met David (The Jonas Project’s Capacity Builder) and one thing lead to another. I got a mentor, William Osgood, and we have been working on registering my company as a Service Disable Veteran Owned Business. It’s important because the state reserves 5% of contracts for SDVOB,” says Tony.

“This is the best feeling ever. But knowing that there are so many people willing to stand behind and support vets is awesome!”

In the rare moments when Tony isn’t working on his business, he’s working on his Associates degree in Criminal Justice at Pierce College in Woodland Hills, CA.

August Update:
Tony recently won his first four security contracts, and they came all at once! “We will start hiring veterans, and will be able to still make a profit. We will hire about 8-15 Veterans in one month. And we’ve just grown from three employees to 15 overnight.” The contracts are for security for schools and synagogues.